AFI Unchained (Ribbons are for the weak)

By cutting a chain (instead of the normally used ribbon) AFI Sudan was declared open officially and in full production.

The Cylinder and Rod overhaul department was used as the opening location for the official part and celebration.

A factory tour was organised and all the aspects and impact of professional hydraulic overhaul and maintenance were explained. The state of the art Seal Manufacturing, Hard Chrome Plating and Polishing facilities are unique for the west Africa region.

The total AFI Team is very proud to finally have reached this milestone. They are ready to help you! 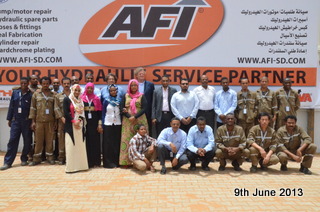